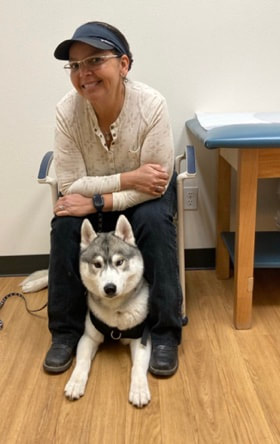 Felon is my service dog trained for hypoglycemia alert. We are currently working on seizure alert training.
My name is Anastasia.  I was born and raised in the Fresno area, and grew up in a farming community.  I was heavily involved with Future Farmers of America and enjoyed showing all types of livestock. Growing up on a small farm I was exposed to raising animals from a young age, and had a passion for it.  My parents also had dogs, and I was very interested in learning about the pedigrees and history behind them, as well as dog training.  I spent countless hours in my school library reading books about horses and dogs, and it was my dream to have a ranch where I could raise animals.  In Highschool i met my future husband Douglas, and our common interests sparked a friendship that has stood the test of time.  In 1993 I bought an AKC registered Siberian Husky named Mischa, and had high hopes that she would be my first show dog.  Sadly I found out quickly that  Mischa was only a pet dog, and had no future in the show world.  This inspired me to start building myself a breeding program that would allow me to follow my dream of producing beautifully sound, show quality dogs.  I set about studying pedigrees and learning as much as I possibly could about the breed.  I familiarized myself with the history and background and once I decided the direction I wanted to pursue I set in motion finding the dogs that would eventually lead me to where I am today.  My plan was to have dual purpose dogs that would be as beautiful as any show dog but would also have the characteristics of a Siberian true to it’s working roots.  I wanted health to be a primary focus, and was disappointed many times over to find that a dog I purchased from a “reputable” breeder had a health defect and we had to retire them and start over.  Breeding is never to be taken lightly, as every life we create ultimately is our responsibility in this world.  So we dabbled in the show world, but as a young mid twenties aged outsider, it was very difficult to break in to the show world.  So I focused on breeding pets that were as close to show quality as I could produce, and for many years was happy to send these puppies into loving homes.  Years went by, and after my kids were older and life was fairly quiet the urge to show hit me.  Douglas and I decided to reach overseas and found a breeder in Russia that had TORTIK, a gorgeous stud dog that had been very successfully shown and had multiple titles and health testing.  We brought hi, home and he was the spark that started many years of prosperity in our breeding program.  He fathered many champions for us and also put amazing puppies in families all over the country.  Although TORTIK is older now, he still enjoys competing as a veteran and regardless of his advancing years he is still a show stopping boy. 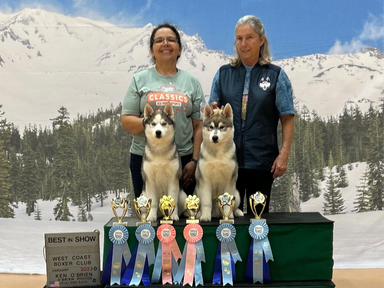 Patty and I with two of our beautiful puppies that won multiple Best In Shows!
​Meet Patty!  She is the official “Nursery Manager” and she personally raises all of our puppies.  Douglas and I met Patty years ago when she came to us looking for a puppy to show.  She had successfully Championed dogs in the past, and really loved to show.  We struck up long conversations about the breed, and came to realize that we had very common desires and goals for what we wanted to see for the future.  We started attending shows together, and it wasn’t long before she and her husband David became honorably family members.  After the first year of friendship, I mentioned to her that I was having difficulty keeping up with demand for puppies, and that I had a three year waitlist.  Given that I had all of my adults to maintain and give adequate attention to, it was very hard to raise litters without taking too much time away from the adults.  Patty, who had recently retired then suggested that she could help me raise a litter if I would like.  So I raised a litter and Patty raised hers.  Both litters were born the same week, but as the weeks went by Patty’s puppies were bigger, happier and just flat out thrived.  Mine were healthy and cute, but Patty’s were absolutely stunning.  So after that point we set in motion a partnership that allowed me to keep the adults, and Patty raises the puppies.  We built a beautiful nursery at Patty’s house that is monitored by camera 24/7.  Every minute of the day she is either with the puppies personally or watching and listening over the cameras.  Pregnant mothers are kept in her home, until they are ready to give birth.  At that time she keeps them near her bed so that she hears every move they make.  Newborns continue to live in the house until they are all thriving and starting to walk around.  At that point they graduate to the nursery, where they enjoy a temperature controlled indoor/outdoor run that is set up to give mom safe areas to get time alone and for babies to start exploring their world. 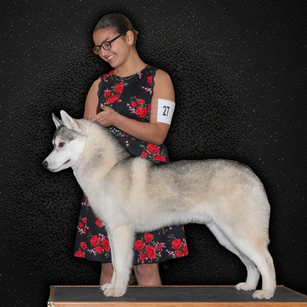 This is Reagan, our Daughter.  She was born in 2006 and has grown up in a house full of Siberians.  She is an excellent student and enjoys athletics and music. When her schedule allows she attends shows with us and especially enjoys showing her own dog Knox.  She is a sweet, funny girl with a big heart and aside from working with Knox she also has a cat and raises chickens and turkeys, all of which our dogs would eat if they could, but she’s very careful to keep them separated. 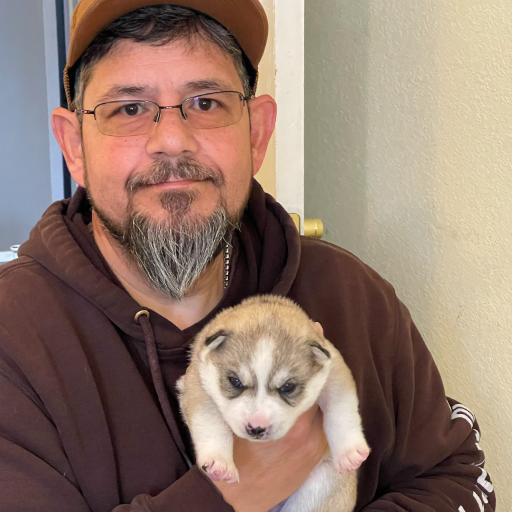 Last but certainly not least is Douglas, my husband.  He has always been very patient with my love and passion for dogs, and over the years has been the most supportive husband I could have ever hoped to have.  In 2020 he became debilitated by chronic migranes that had plagued him for several years.  As a result he is often unable to help out as much as he would like, but he always finds comfort in loving on them and knowing that they are sympathetic to his pain.  We hope that in the future he will be able to take a more active role, but for now his self care is primary.  His personal dogs are sisters Fiona and Jiggy.  In this photo he is holding our keeper puppy from Fiona’s first litter.  A sweet little gray girl that we hope will follow in the footsteps of her parents, grandparents and ancestors.